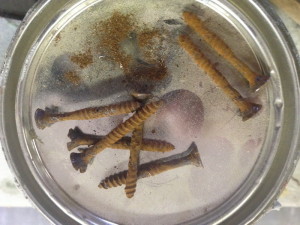 Anyone who’s followed my blog or FaceBook page me know the high regard in which I hold Bill Greenwood and Greenwood Watercraft (aka Greenwood Canoe). However, with almost every Greenwood canoe I’ve encountered there comes a day when I use language not appropriate for a public posting. That’s the day when I must remove the gunnel screws from one of Bill Greenwoods otherwise fine boats. As the story goes, Bill, and his supplier of hardware, got into an argument over the price and volume of the #8 screws used to attach his mahogany gunnels (outwales). Consequently, many of the Greenwood canoes built in later years “featured” regular, slot headed steal screws. Often these screws are so badly rusted that it’s impossible to remove them without completely destroying the beautiful mahogany outwales. Some of the tools I’ve been forced to employ include a Louis Sauzedde modified screwdriver (see below), an impact drill and a butane torch. Oh, and a whole raft of cuss words, some of them Polish. 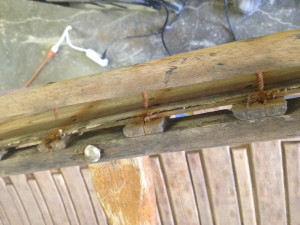 Here in coastal British Columbia many canoes are exposed to salt water either directly or through salt laden air. It’s a climate that’s particularly hard on canvas-covered canoes as rot and rust occur year round. For those of you building or restoring a wood and canvas canoe, please, for the love of all that’s holy, spend a few extra dollars and use brass, or better yet, stainless steel screws and hardware.

For those of you faced with the task of removing, old, rested screws from a canoe, or any boat, the following video by shipwright, Louis Sauzedde, walks you through the basics.